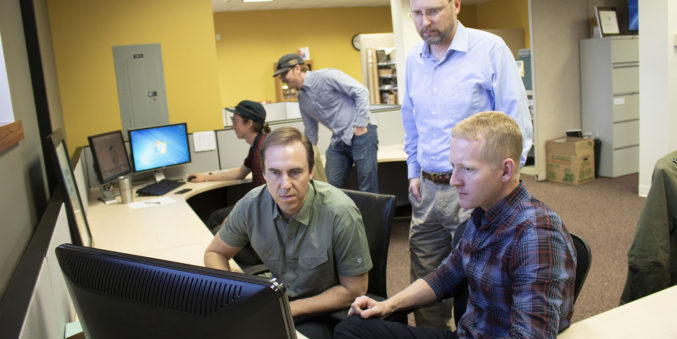 Orbion Space Technology began with an idea, a napkin sketch, and a conversation with MTEC SmartZone. Two short years later, the company has raised over $2.7 million in capital and is leading the charge in how automated robotic manufacturing and space hardware is used.

CEO Brad King told the story of how the company was formed: “The tinder meeting the paper was when our CTO Jason Sommerville and I had these ideas about the space market place and the available opportunities. At that exact same time, MTEC SmartZone was exploring the university to see who had marketable technologies and Ray Johnson, Marilyn, and Jason Mack pulled me aside and said, ‘Okay, tell us what you’ve got.’ It was the perfect match. The spark was really by the SmartZone to say, ‘You could form a company, we’ll show you how to raise the capital and get you started. You should do this.’”

What Orbion does is simple: build small engines that push satellites around in space. What sets them apart from others in their field? “Surprisingly it’s not the rocket science that distinguishes our product, but instead our revolutionary manufacturing approach that enables us to provide high performance at low cost,” said King. The field is competitive, but there are currently only two or three companies in the world that offer a similar product.  Orbion believes that these existing players are not well-positioned for the rapid changes happening in the space business.

Sommerville explained, “Our competitors’ business models were established prior to the recent growth in space activity. All of the rules are changing, and we have timed our entry into the market so that our strategies are aligned with the most recent developments in the industry.”

King added, “This is a brand-new market. While we know of some competitors, I bet we haven’t met our most serious competitors yet because they are starting up just like us. That’s what makes it so exciting. It’s anyone’s game.” Their number one goal is to create growth in this community. King explained, “Orbion is, and will be, a U.P. company. The balance of quality of life and access to a world-class STEM university are the keys.”

Jason Makela, VP of Engineering, agreed and added, “The company is already growing, and it’s bringing people back to the area.”

King concluded, “You don’t have to sacrifice anything by locating a high-tech business in the UP. If you have a solid business plan and a good team, you’ll compete with anybody.”